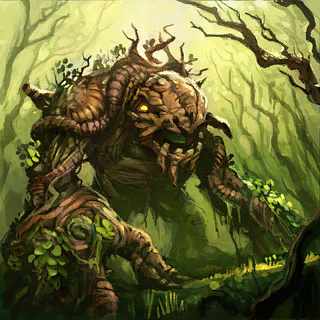 Unit of the Nature faction. This uncommon card was released with the Twilight Edition and has no affinity variants, nor a promo version.

The Grimvine is a highly versatile, and powerful creature of Nature. Boasting mighty ATK power against structures and able to root opponents within its proximity.

Grimvines have both a very flexible orb requirement and highly versatile applications. As a result, the grimvine can operate both on its own and with other creatures very well, and fit into a wide assortment of decks.

Grimvines are a solid choice for many scenarios. Their immense power against buildings is very helpful on certain maps where buildings are very frequent in the late game.

However, grimvines do not have any counter damage bonuses, so they struggle against opposing creatures that can counter them.

Grimvines are an iconic unit in RPvE gameplay for nature because of their versatility. They are effective at crushing spawn buildings quickly and serve to provide reliable ground presence.

They combo very well with the

Giant Wyrm in this regard, though they combo well with most end-game units.

Grimvines are not used in PvP, as they are a T4 unit.