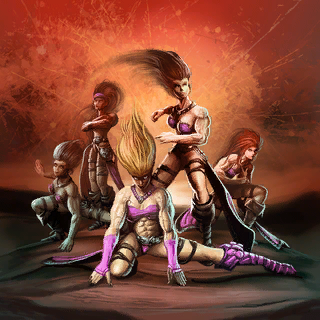 Spell of the Fire faction. This common card was released with the Amii Edition and has 2 affinity variants,

Nature, but not a promo version.

A spell that amplifies the damage of the unit it is cast on, but only if it is female.

Godspell: Strengthens the power of women: the targeted female, friendly unit will deal 35 / 35 / 40 / 50% more damage against male units and evaporate a poison that additionally makes every male, hostile unit within a 15m radius lose 15 life points per second. Can only be cast on females. Lasts for 15 / 20 / 20 / 20 seconds. Reusable every 20 seconds.

Girl Power, while it can be powerful when cast on certain creatures tends to not really carry any value. The situations where using this card make a difference in battle over other buffs is very uncommon, and you'd be better served by other cards.

Girl Power is no stronger in PvE than it is in other modes, but using it can get results if you carry the right cards.

Girl Power won't serve you well in rPvE, you're better off running other cards.

Girl Power can have some application if you use it on

Gladiatrix, but other than this it has few other areas of applicability in PvP. You'd just be better off with another card.