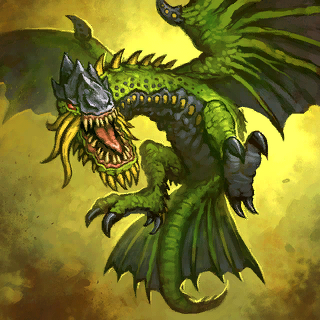 An incredibly strong flying behemoth of a unit. The Giant Wyrm is rock-solid, boasting significant health and heavy damage output, but lacking any truly unique traits.

Powerful, yet expensive. Giant Wyrms pack alot of power into their summoning, and certainly do pay off well. However, they are not an unstoppable force and will perish rather quickly if used carelessly.

Giant Wyrms are easily capable of dominating the later stages of a mission on the easier difficulties, thanks to their strong attacks, decent hitpoints, and airborne status. However, the Giant Wyrm becomes shadowed by other, more specialized T4 creatures as the difficulty level increases.

Although it is by no means a weak creature, on Expert; a certain strategy is often required to achieve success. This often entails the use of more advanced, and less standard cards. As a result, the Giant Wyrm is typically a more basic option; though an effective one nonetheless.

The Giant Wyrm is a very capable creature in Random PvE, thanks to its mobility combined with powerful attacks. It is not uncommon to see several of these dominating the skies on the quest to conquer, but it leaves some glaring weaknesses as a result.

Because it is an airborne creature, it does not provide Ground presence. A critical aspect of late-game Random PvE, which enables a player to keep the momentum of their push going. Without it, they will inevitably grind to a halt once the Giant Wyrms perish.

With an extreme 300 power cost, Giant Wyrms are rare to see. Nevertheless, when they do come out they can pose quite a threat.

Because of its impressive stats, Giant Wyrms can actually often raid bases alone, as they have the capability to simply fly away if odds become unfavorable and can tank weaker attacks with ease.

Typically other players are often fighting, so the Giant Wyrm can perform flank manuvers and siege bases, putting the strain on ones foes.

Since you spend 300 power just to go T4, accomodating this beast can be extremely difficult and often very dangerous.