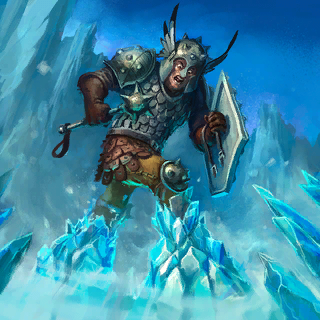 Spell of the Frost faction. This common card was released with the Renegade Edition and has 2 affinity variants,

Shadow, but not a promo version.
In Skylords Reborn the Fire affinity is available to all players as a starter card.

A valuable debuff spell that hinders enemy movement, in addition to (

Godspell: Cools down an enemy unit until it is almost frozen. It will then only be able to move at normal walk speed and to fight at a slower pace. Lasts for 10 / 15 / 20 / 20 seconds. Reusable every 20 seconds.
Tainted Slowdown
Affinity Dependency:

Godspell: Cools down an enemy unit until it is almost frozen. It will then only be able to move at normal walk speed and takes 25% more damage. Lasts for 10 / 15 / 20 / 20 seconds. Reusable every 20 seconds.

Frost Bite is incredibly versatile and immensely useful. Its effect can find application in every tier and its effects are beneficial on almost any target.

Use this spell to target valuable or powerful enemy targets, maximizing the payoff.

Frost Bite is highly effective when it is cast on targets of high priority. Typically, this is XL units and Bosses, who have the stats to pose a grave threat.

Its low cost means it can often be cast with impunity.

Frost Bite retains all of the same uses and benefits as in CPVE. However, this mode better incentivizes the Tainted affinity due to the sheer strength of players in the end-game. 25% becomes a huge boon.