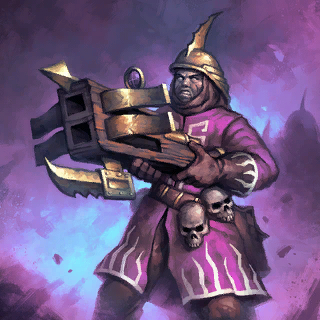 Shadow's early-game archers are very solid all-around, and possess one of the most powerful abilities. Albeit balanced by the hefty price paid in exchange.

Active: Unit deals 12 / 14 / 16 / 17 damage for 20 seconds. After the effect wears off unit will die.
Frenzy is what allows the Forsaken to stand out and surpass any other archer of their tier in single-target damage.

Forsaken, like their cheap brethren: are strongest in numbers. The forsaken reflects this more than any other archer due to frenzy, which can turn an army of Forsaken into a machine gun of damage. Despite their average stats, a shadow player will know when to activate the ability and how to most abuse the raw power it carries; before their army is rendered dust at its end.

Forsaken pair strongly with their big brother, the

Nox Trooper; and also compliment the

Skeleton Warriors who serve as tanks. Forsaken also go well with the

Dreadcharger, as they fill in the counter gap.

Out of all others, perhaps the greatest combo with Forsaken is the

Motivate spell, which provides a massive boost to damage which can be further increased through Frenzy and the Counter bonus. All of this combines to an absolutely unprecedented amount of ATK: 1476 / 1722 / 1968 / 2091.

Forsaken, with their low cost and incredible damage; are an obvious candidate for PvE gameplay. Although their applications can be dependant on the map in question, as many maps need mobility for success; where the

In other circumstances where speed is not a necessity, Forsaken are incredibly capable and can tackle most any opposition if properly utilized. It is best to save

Frenzy for large fights and situations where it is safe to use it.

Forsaken are commonly paired up with

Nox Trooper in rPvE gameplay, though in general are a solid pick for most battleground matches. They pack enough of a punch to easily clear the first few Camps, and when paired with

Motivate, can crush their way to the Fourth Era quickly.

A common tactic is to pair them with the

Soul Splicer, allowing them the capability to heal when making the initial push.

Forsaken, like many archers; are a solid pick in PvP gameplay. Attacking at range prevents Root CC from being as huge of a hindrance, but the Forsaken are not gifted in hitpoints. They are more readily dispatched than most archers, and their ability can work against them if a foe can simply avoid their attack range to let them die off from the expiration.

Forsaken work best in situations where your foe cannot afford to run. Such as assaulting a critical fortification, like a monument. Or where an opponent has to come to you, it is these moments where Frenzy truly shines and allows the Forsaken to clean house.

It is important to note that Frenzy still counts down if the Forsaken are CCd, which means that Nature and Frost have an advantage

Glyph of Frost, and CC such as

Hurricane, or the sleep ray of the

With the capacity to put out upwards of 1000 damage in 20 seconds, Forsaken crush most opposition in sheer power.

Due to Forsaken dying after this skill is used, it is not difficult to lose entire armies to a poor casting.

- Forsaken are capable of the highest single target damage of any archer in the First Era, though they do not match the firepower of

Firesworn against Large creatures, against every other size they reign supreme.

- Forsaken can be used in what is known as a Bug Deck. A deck that utilizes the

Skeleton Warriors are also used for this.