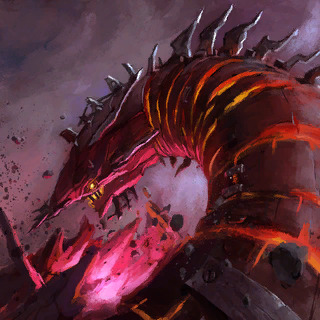 Unit of the Fire faction. This rare card was released with the Twilight Edition and has no affinity variants, nor a promo version.

Autocast: Every 3 seconds, unit hurls a magma ball that deals 480 damage to enemies in a 10m radius around its target, up to 720 in total. Knocks back small and medium units.
Earthquake
Power Cost: 100

Active: Activate to trigger a groundshaking quake that deals 850 / 900 / 1000 / 1100 damage to enemies every 2 seconds for 6 seconds. Knocks back small, medium and large units. Reusable every 30 seconds.
Percussive Birth

Passive: When being spawned the unit is undazed and deals 500 damage to enemy units in target area, up to 2000 in total. Can be spawned nearby enemy units and structures excluding walls. Knocks back small, medium and large units. Affects ground targets only.
Earth Dive

Passive: While moving around unit takes 50% less damage and knocks back small and medium units dealing additionally 250 damage to enemy units in target area, up to 1000 in total. Affects ground targets only.