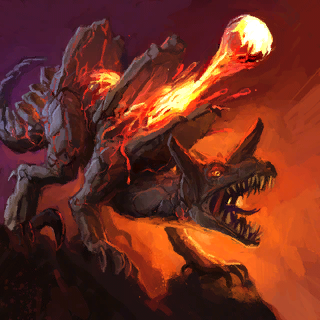 Incredibly versatile units. Fire stalkers are capable of fulfilling the roles of long-range siege and swift skirmisher all in one unit.

Autocast: Every 5 seconds, unit shoots a fiery bomb that explodes after 3 seconds dealing 80 damage to enemies in a 10m radius around its target, up to 120 in total. Has a long range of 50m. Knocks back small units. Affects ground targets only.
Siege

Fire Stalker is one of the most versatile units, but depends heavily upon the strategic use of Inner Fire to make the most of this card.

Running these units in swarms is the most effective method to inflict large swathes of damage.

Fire Stalkers are excellent for general gameplay, capable of dispatching mid-game foes with relative ease. Their capacity for siege allows them to function rather independantly from other units here.

Fire Stalkers can be useful for clearing towers and nuking spawn buildings up to the T3 monument, and thanks to their ability to switch combat styles, they can also get right into the thick of the fight.