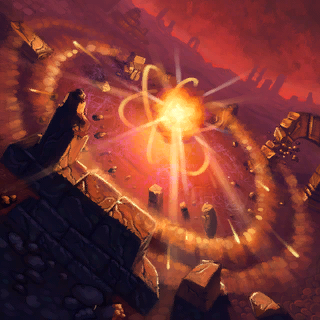 The late-game successor to

Lava Field. This spell inflicts significant damage, but has a long preparation time.

Fire Sphere can be applied in many ways to your combat scenarios.

Fire Sphere is highly standalone, and is effective in many situations. However some would prefer

Fire Sphere can be very helpful for cleaning up large fights or nuking bases and XLs before they are aggro'd to you.

The sphere also has potent application against bosses, such as the Twilight Wrathgazer in

In Random PvE, despite its power the spell tends to be too slow to get benefit from. By the time it detonates, the train will have already smashed the base.