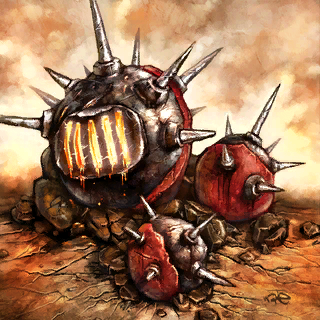 Building of the Fire faction. This common card was released with the Twilight Edition and has no affinity variants, nor a promo version.

An immobile explosive device that can inflict significant damage to anything that is unfortunate enough to find itself too close. Highly effective against close range attackers.

Active: Activate to trigger Detonation by destroying the bomb.
Allows you to determine when the bomb should detonate, enabling some tactical control.

The Fire Bomb is essentially one giant landmine, capable of dealing massive amounts of damage that can kill first and second era units instantly, and severely damage third era units. Because of the immobile nature of this device, as well as the limited range of its explosion, placement is key to maximizing the effectiveness. Ranged and Airborne units have the capacity to destroy this bomb without any repurcussion, so if you intend to play around it you must protect it with ranged firepower of your own.

Mine is often regarded as superior to the Fire Bomb in every way, as that spell does not bind power and is capable of dealing far more damage than this explosive can. However, that spell requires enemies to stay within range for the duration or less damage will be inflicted overall. One advantage Fire Bomb has is its instant delivery of its entire damage output.

Because the AI often blindly runs into combat, Fire Bombs are extremely effective as you can often get a group of enemy units to focus fire on the bomb instead of your units. During this time, you can easily retaliate or retreat and let the bomb detonate to deal damage. Its hitpoints are sufficient enough to offer some damage sponging in early battles, and the explosion can help even the odds if you happen to be overwhelmed.

In RPvE, a Fire Bomb can be constructed to pull the enemies of the first set of camps towards your units and then detonate to give yourself an edge. This is a viable alternative if you do not have