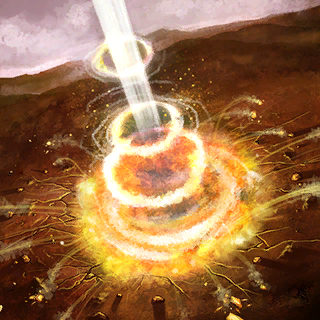 Eruption is a first tier spell that provides instantaneous damage when cast, but comes with a hefty price tag for the payoff

Because of the cost of this card, knowing when and where to cast it is key to make the most of it. Most often used to "pop" an injured target or damaged structure at or below 300 HP to instantly defeat/destroy it, which is very important in Player vs Player (PvP). In PvE, Eruption serves a more streamlined purpose of dealing damage and knocking around small squads.

Eruption is a good spell for dealing burst damage and disrupting small squads of enemies, such as

Twilight Archers. However, because of its price you must choose carefully when to cast it, as otherwise you might deprive yourself of power.

in rPvE, "popping" becomes key in the higher difficulties and Eruption is perfect for this purpose, capable of removing the spawn buildings before they can create a fresh wave. Many fire decks will incorporate this spell for this purpose, but otherwise the spell serves the same applications here as in the campaigns.