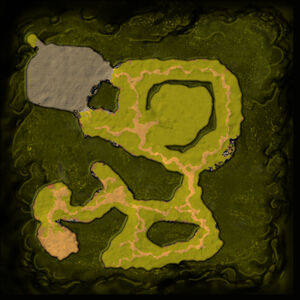 The Twilight has passed. The humans are returning to the surface and meet an unknown evil, a strange curse that seems to befall man and beast alike. As the mercenary Rogan Kayle calls up to the Skylords for help, you hear his plea.

Expert
Encounters with Twilight is a 1-player PvE scenario that can be played on Standard, Advanced and Expert difficulty. It is part of the campaign story The Curse.

Aid Rogan Kayle and a ragtag band of human refugees in their clash with an unknown evil.

The first mission in The Curse storyline. In this first real mission, you must assist

Rogan Kayle in his journey across the surface, through several Twilight villages.


Rogan Kayle had never been a man of prayer but as he stumbled through the twisted land he had once called home he knew that might change.

Dropping heavily against a mossy boulder, his eyes feverishly scanned the rocky landscape for his pursuers. They were nowhere to be seen, but Rogan knew they were close. Once noble Windweavers, elven rangers of Wildheart forest, they were now abominations who simply hungered for his flesh. Ahead in the distance he could hear the screams other refugees and roars of something big, possibly another giant hunting for sport. Rogan pushed himself back to his feet, knowing his pursuers would be upon him at any moment. But as he prepared to run he found he could not move. There was no place to turn anymore. This land did not belong to humans, surely all was lost. His gaze fell on one of the old mossy stones. It formed part of an old monument, a relic created by the long-lost Amii.

To what end, Rogan did not know, maybe worship of the gods. Hadn’t they, with the Skylords, once defeated the giants? Where were they now? Would they let the world end this way?

With sudden fury Rogan hurled his sword at the encrusted monument. As thesteel clattered off the massive stone, it tore away some moss. For a moment all was quiet, even the wind seemed to hold its breath. Then, a faint glimmer of light built at the tip of the ancient stone. It grew in power and spread downwards, peeling off emerald moss to reveal intricate glyphs carved deep into the stonework. Terrified, Rogan dropped to his knees. With no hope left to light his way, no path out of the darkness, his lips began to move. He prayed to any god who would listen. And he was answered.


Rogan pushed his group hard, afraid of being asked what was going to happen at the city called Hope. If the curse was there too then where could they truly call home? Heavy armor chafed his sweating body but Rogan tried to ignore the pain as his mind raced, desperately trying to come up with a plan. The old sun’s death had heralded not only the freezing twilight, but also a terrible curse. It had corrupted the creatures that had stayed on the surface during the twilight.

Now, with giants hunting them,the humans had been driven straight into the fangs of a new threat . Maybe, Rogan mused, urging the other northlanders along, someone at Hope knew of a safe haven.

Part of him wanted to disappear into the night, escape the role of leader thrust so suddenly upon him. But then what? Rogan lowered his head and picked up the pace, they had to reach Hope in time. His men glanced at one another, wondering what kind of man their new leader would prove to be.

As the Rogan and his men departed, Viridya’s image descended onto the burial hill where the Wrathgazer had fallen.

She knew why she had come. It was here the girl had been buried so many generations before.

Viridya could still feel the faint echo of her presence lingering between the old roots. The Skylord Viridya touched a ghostly hand to the scorched ground. Time would tell if she could bear a legacy she had not asked for.

The mission starts in the thick of combat. Rogan will speak briefly before you are able to summon your first units, and your first main target will be to dispatch a

Twilight Devastator, which has capped health until you inflict damage. Once defeated, claim the power well and build an army to move east. When you engage, be wary: Two squads of

Twilight Minions and a

Twilight Brute will advance on your position. From here, dispatch the two Brutes next to the Amii Gate and claim the second monument.

Rogan will talk about the next area briefly before the gate is opened. A

Twilight Slaver will pursue several lyrish civilians through the gate. Defeat him as he approaches, but clear the area when he falls, as he explodes when defeated. Move into the next area, and you will come under attack by four squads of Twilight Minions and a Twilight Archer. Defeat them and destroy the

Twilight Infestation nearby to clear the power well. From here, you can choose to move east or move south. If you choose to go east, two brutes guard an infestation and a

Twilight Skyscorcher. An ambush may be triggered as you approach, and when you destroy the infestation two

Twilight Crawlers will emerge from the wreckage and attack you.

If you choose to go south, face a Slaver and destroy an infestation and

Twilight Infected Tower Beware, as an ambush from the east may come to attack you! Claim the third monument. Once claimed, you can advance east to the largest camp: Its primary inhabitant is another Devastator, which you will need to dispatch. Be warned, once it falls a

Twilight Hag will appear from the nearby cave. Destroy the infestation and skyscorcher, and this section is clear. Now comes the tricky part, as you will meet

Viridya and she will explain the next stage: A massive twilight village up north past an Amii gate. You are given two choices: Attack or Defend.

If you choose to attack, you must be aware of the

Twilight Hulk that skulks around the area. Utilizing large quantities of

Swamp Drakes will make short work of it. You also need to content with patrols of brutes, slavers, and archers around the area. It is full of various infestations, towers, and a single

Twilight Manifestation is at the center which could respawn the hulk if left up too long. Also beware of the flying

Twilight Creeps in the area too, and two ambush zones of Twilight Pests.

If you choose to defend, construct the wall near the Amii gate and start building your defense.

Necroblaster is extremely effective here, as is the

Morklay Trap. Man the walls with your best archers, and make sure your defense is solid. After 180 seconds, you can activate the

Amii Screaming Stone on the hill in the center, and this will destroy every building in the northern camp, and call every enemy to attack through the gate. Prepare for a huge fight, and beware the hulk who can smash through your wall effortlessly.

Regardless of how you clear it, you now get access to the northern area with three power wells and the fourth monument. You must now prepare for the boss fight against the

Twilight Wrathgazer which patiently waits at the burial hill. Use this opportunity to build a massive army of T4 and T3 creatures, being sure to divide up between melee and ranged. Once you have a sufficient army, attack the Wrathgazer. During the fight, spirits can emerge which will try to reach the wrathgazer.

Angry Spirits cause a massive explosion, while

Cruel Spirits will freeze your army if they reach him. Dispatch them with ranged firepower before they can get to him, and if you focus fire long enough the wrathgazer should fall quickly. With this, the mission is concluded.

The advanced version of this map is very similar to standard. With a few key differences:

The overall difficulty of Advanced is very much like Standard, so completing it should not be too different.

The first map available on Expert mode, and it's one of the easiest to complete.

An expert guide for completing Among the Old Gods Achievement has been provided for playthrough advice, replays and decks, written by Dallarian. [1]

Below will cover each act and the differences from other difficulties.

The most prominent feature of the first act is the presence of Twilight Hags and a tower guarding the T2 orb. This can make pushing with small units difficult, but fortunately they are susceptible to focusing attacks on a nearby squad of

Northguards. If this occurs, you can safely take them out while their attention is diverted. Otherwise, engaging them with large numbers of lesser units can circumvent their knockback.

Easily the most difficult section of the map. Constant patrols of

Twilight Whisperers circle this area, and will not only aggressively attack you but also pull the attention of Rogan Kayle. Rogan cannot die, or the mission is a failure. Rogan tends to be highly aggressive to any enemy nearby, and this might lead to him charging forward into harms reach. If you engage, you must keep enemies away from Rogan to avoid him running in to attack.

Vilebloods leave behind deadly acid upon their death, so building power wells here is ill-advised due to the danger this poses to them. Whisperers blind your ranged units, making melee preferable as they can shut down an entire ranged assault. This combination is difficult to beat, but can be conquered if your able to make smart use of your resources.

The southeast camp has a

Twilight Abomination guarding it. If you can, taking your third orb can ease the process of killing it if you can protect the orb from attacks. Otherwise, make use of your units abilities, or bring

The third act gets tricky. Once the Amii Gate opens, you will have a short time before two

Twilight Hulks come charging in to attack you. For this reason, stalling the second act to build defenses is a smart move to avoid being caught by surprise. The outpost is heavily reinforced, with four different hulks throughout and even a

Twilight Dragon. The dragon fortunately will not respawn upon being killed and should be a priority target if you can get at it, to remove it from the enemy forces entirely.

If you choose to defend, try to wait for the two hulks to attack first to reduce the number of incoming XL units. If possible, kill a third one before you call the wave to reduce it further before the other two respawn. If attacking, focus your firepower on spawn buildings first to cull repeated attacks from the north.


The Twilight Wrathgazer is easily the simplest part of the entire mission. The approach to killing it is identical to Advanced Difficulty, but do be advised that the many spirits respawn much faster on this difficulty, so keep tabs on them throughout the fight!