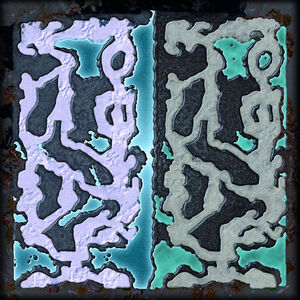 The Lost Souls have opened portals through time and devastated the past of Lyr. Two Skylords will fight in the past to undo the damage, their success will restore defenses in the present. Meanwhile, two Skylords in the present must close the time portals of the Lost Souls. Rogan, Mo, Jorne and the Ragged King must reach and ignite the Cloudfire Beacon in the north to finally stop the invasion.

Empire is a 4-player PvE scenario that can be played on Standard, Advanced and Expert difficulty. It is part of the campaign story The Hunt for Blight.

Fight in the past and in the present of Lyr to undo an invasion of the Lost Souls.

"When Mo arrived in Lyre, we saw that while we had been distracted with Blight, Lyre had been attacked. The Lost Souls, the very force behind the Harbinger and the Twilight curse, had invaded and destroyed Lyre. But how could all this have happened in the blink of an eye? The reason was terrifying. The Lost Souls had opened rifts through time and traveled into the past of Lyre undoing our work, killing Rogan Kalye and within a heartbeat, turning Lyre into a land of ghosts and ash. They attacked Lyre because it harbored the most prominent weapon we might have against the dead; the Cloudfire Beacon whose cleansing light might be able to banish the Lost Souls."
— The Aedai Chronicles

It was a few months before Mo and Blight met for the final time at Raven’s End. Only a few hours ago, the guns of Lyr had roared once more and the Twilight invasion had finally been stopped. A freshly-crowned Rogan Kayle went for his first ever morning stroll. As he directed his strides toward the shattered remains of the palace gardens he felt memories wash over him; it had been a day not unlike this, crisp and clear, that his journey had begun. Below their new king, the city slept on as dawn breathed a tiny spark of gold into the night’s dark blue.

Kayle had never in his wildest dreams imagined he would become a king, though with his new role came new responsibilities; just hours ago he had stood beside countless deathbeds, bringing what comfort he could to soldiers and friends in their final moments.

He had held back tears as he watched too many die from the vile wounds wrought by Twilight abominations. His thoughts moved to an orc he had met, one of the wounded from the Treasure Fleet. In the heat of battle he had fought like a creature-possessed, a huge grin on his face despite the terrible wounds that decorated his body. Afterwards, he had faded away on a simple linen cot, using his last breaths to sing about juggernauts and blood soup. Rogan shook his head, hoping the brave orc was somewhere better.

A soldier approached, stumbling slightly. Perhaps one of the new recruits, still unused to the weight of full armor, Rogan mused. He stifled a smile that had started to creep over his face and tried to assume a more dignified manner. Rogan was about to hail the soldier when he spotted the trail of blood being left in the snow behind him. The man lifted an arm in what seemed a warning gesture as, behind him, reality opened. A creature leapt from the shimmering rent; the size of a grown man, it was a twisted creation of vile magic and jagged claws. It howled and sprang at the soldier, shredding steel like it was paper and tearing him apart in one quick motion.

Rogan opened his mouth to shout the alarm, but before a sound could leave his lips, the creature became a blur that tore off his left arm as it passed. He stared numbly as crimson life spilled onto the pristine white that blanketed the ground. His mind formed one word as blackness took him. Beautiful. Then Rogan Kayle, king and hero of Lyr, died. Through the crack in reality more vile creatures appeared. Tendrils of ghastly blue light writhed around them, the glow casting an unreal shine against the morning’s fragile light.

Bren Morhold stared at the clock, just as he had done for the past three years. His eyes followed the steel hands, noting each mechanical spasm as his mind waged war against insanity. This was how he passed each day. Deep in the dungeons of Lyr it was the tradition to gift each life prisoner a clock. What better way to force them to witness time’s crawl, hear their lives sliding away, unspent. The kobold device was a tightly sealed contraption, securely fastened to the cold stone, some said by magic. In the past prisoners had been found curled in the corner of their cell, fingers bleeding and nails broken from trying to pull the cursed things apart; tick-tock the clocks whispered. The minute hand moved once more, Morhold listened to the delicate blade part the air like an executioner’s axe.

The guards had long since fled, screaming something about twilight swallowing the sun. But the dungeon’s kobold doors and locks had proved too good for the abandoned prisoners to break. For a year now they had been left to their own devices. At first Morhold had led them, for on the surface he had been known as the Ragged King, ruler of the northern outlaws, a rogue challenged only by the infamous Shane Blight. Tick-tock.

But as the weeks slid by, as food ran out and the guards had still not returned, Morhold became something far worse than a rogue; in the harsh light of the kobold lanterns he evolved into a hunter of man flesh.

While he had lost count of his victims, he still kept count of the minutes, days and months that had passed. Blessed be his little piece of kobold genius. Tick-tock. The minute hand snapped forward again. Then jerked back.

Morhold held his breath. He had heard the sounds of battle above-ground last night and wondered what was happening on the surface. His instincts told him something above had changed. Slowly the huge man got up from his stool and moved towards the dungeon entrance.

Moments later the thick, steel doors glowed blue and exploded. Creatures born of nightmare quickly overran the few screaming prisoners who had gathered, hoping for release. As the beings tore aside thick iron bars, their glittering eyes glowing in the semi-dark, Morhold smiled and ran at them, hungry for different game now.

Emerging from the shattered entrance into weak sunlight, Morhold inhaled deeply and closed his eyes, savouring the breeze on his face. All below was quiet now. Tick-Tock whispered the clock inside the Ragged King’s empty cell.