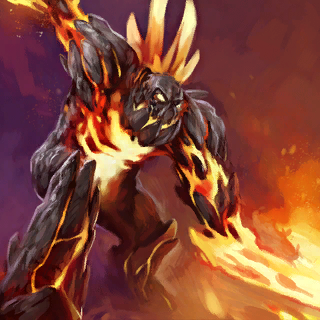 A very versatile creature. The Emberstrike is powerful and cheap, but its counter type and size make it seldom seen.

Passive: When being spawned the unit is undazed and causes an explosion that deals 900 damage to enemy entities in target area, up to 2700 in total. Can be spawned nearby enemy units and structures excluding walls. Knocks back small and medium units. Affects ground targets only.

Thanks to its forgiving power cost and versatile orb arrangement, this card can be incorporated into many decks. Its combat proficiency is well suited to an expendable frontline bruiser, putting out a great deal of harm before being killed.

Summoning them in the middle of a fight can be useful thanks to Fiery Birth.

Emberstrikes combat strength makes them ineffective at defeating large, powerful creatures like the

Twilight Hulk on their own, but in numbers they can put up a fight.

Fire Lance allows them to engage foes like the

Twilight Creep without being helpless.