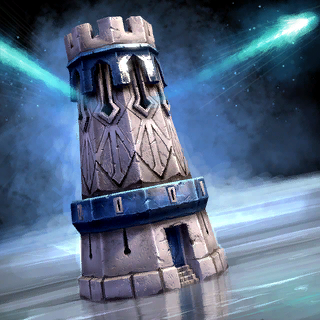 Building of the Frost faction. This common card was released with the Twilight Edition and has no affinity variants, nor a promo version.

The most basic tower in the game, with solid HP and modest damage output.

Cheap, but reliable. Defense Towers are versatile and applicable to most situations and maps, be it to protect an important location or pull enemy forces into its range to aid in a push. There is nothing the Defense Tower is bad at, but it is optimized for nothing as well.

Defense Towers suit Defending Hope very well, and can be used in the third section of Encounters with Twilight if you opt to defend. They can engage ground and airborne threats, so having some of them built can never do you wrong.

Building a Defense Tower near the first camp can let you pull in its units and aid in dispatching them to advance. Outside of this use, there is little reason to bring it into rPvE.