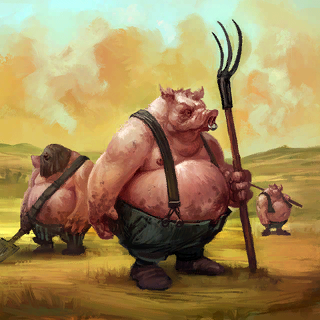 A very valuable spell that transforms enemy units into pigs. One of the best spells in the game as a result.

Oink!
Transforms up to 5 / 7 / 10 / 10 enemy units into pigs for 15 seconds. Affected units may neither move nor attack. After 5 seconds they will be retransformed if being attacked. After the effect wears off, targets are immune against Oink for a while. Reusable every 20 seconds.

Curse of Oink can be one of the most powerful spells, not only in natures arsenal, but the entire game. At U-3 it can porkify a whole army!

The first five seconds of this spell are fair-game to attack with impunity. The remaining ten seconds will force a creature out of its pig stasis if they receive damage.

The best way to utilize Curse of Oink is to abuse the first five seconds as much as possible. Then single out targets among the group while leaving the rest still oinked.

AoE or attacks that damage multiple opponents do not go well with Oink, often reactivating an oinked army.

Curse of Oink can be a lifesaver on many PvE maps. The instant stasis effect can give you plenty of breathing room and regroup for a counterattack, and can also be used to provide a buffer when attacking.

Oink provides similar benefits in RPvE, where the stasising of an attacking enemy force or enemy camp can sometimes be the difference between success and failure