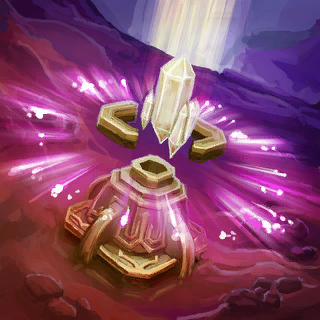 Spell of no faction. This rare card was released with the Lost Souls Edition and has no affinity variants, nor a promo version.

A notorious card who's sole purpose is to instantly destroy power wells.

This spell is incredibly straightforward. When cast, the target power well is destroyed and unable to be claimed for a period of time.

Despite its expense, this spell is extremely useful and incredibly powerful, but is looked down upon.

This card cannot be used in CPvE.

This card cannot be used in RPvE.

Because this card effectively grants instant kills on power wells, it is incredibly useful, but often regarded as a cheesy move.

Is there more to say? The instant destruction of a power well!

Power Wells do not refund any power when destroyed. This means that this spell is essentially an instant 100 power loss for the opponent, while you regain power to void.

This spell is incredibly cheap. 150 power at U3 to force a 100 power loss on your enemy? A steal!

Erhaps the only weakness of Curse Well is that it takes up a card slot that could be used for other cards.