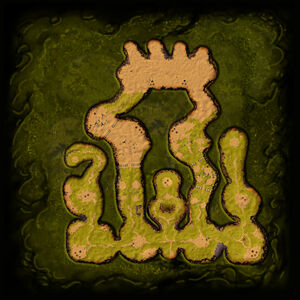 Use the old teleporters to reach the human explorers. Defend the humans against the attacks coming from the north. Simultaneously, clear a path to the south, so reinforcements can reach your position.

The Search for the Gods

Expert
Crusade is a 2-player PvE scenario that can be played on Standard, Advanced and Expert difficulty. It is part of the campaign story The Search for the Gods.

Defend the search expedition that has found a trace of the missing gods.


Brannoc found he had returned to his old home once more. The leader of the Skylords walked its borders, sad the building had been shattered by the giants. He stopped between two stone pillars which had marked the doorway. Between them little Viridya had played and Meanen, his beloved wife, had stood to call him to supper. He ran a hand down one of the columns, feeling rough that which had once been smooth.

His battle with the giants and his invention of Giantsbane, the black powder that fuelled the cannons, had made him Master of the Forge, first among the Skylords. But it had also cost him dearly; his home, his wife and in the end the love of his daughter. And to what end?

Brannoc’s gaze shifted to the skies; he had to find the gods! He was not alone in his quest, mortals had begun to search as well. Fools! What could their feeble senses hope to uncover? But there was something to them now, a stirring of power that would one day have to be investigated. For now though, more important tasks required his attention.


The gods had walked, as if mere mortals. What terrible force lessened them so?

Their godly powers drained, they had dug this hallowed relic from the earth with their bare hands. The portal to the Sunbridge Shrine, where the fire of the sun and the flesh of the earth meet in divine union. The cradle of light, the world’s most sacred place. It had been shrouded by Amii magic, to hide it from the giants. Brannoc already knew what the gods sought there. A terrible truth began to dawn within him.