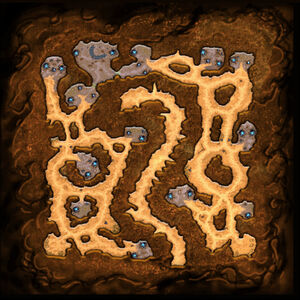 QueekQueek's Raven Walkers will head through the central canyon to destroy the power shrine that blocks your way north. Support them with the Spell Devices in the canyon. Collect charges and control Elemental Crystals to unlock the power of the Spell Devices.

Expert
Convoy is a 2-player PvE scenario that can be played on Standard, Advanced and Expert difficulty. It is part of the campaign story The Search for Twinaxe.

Support a convoy of Raven Walkers and break through the ranks of a Stonekin army.


Where the Southern Wastes met the Red Desert harsh sunlight seared the flanks of the Crimson Shard Mountains. Mo thundered past the impressive sight ignorant of the harsh beauty, his mind elsewhere.

When he had agreed to lead QueekQueek to the treasure in exchange for aid in saving Twinaxe it had seemed a smart idea, but here he was stumbling through a bleak, endless land without much food or water and only the vaguest idea of where to look.

He paused once more to scan the mountain range for the gate that led to the Red Desert. Mo tried to look relaxed, he had to at least pretend he knew exactly where he going.

“How far?” asked QueekQueek, as he had done every hour.

The creature’s skin was soaked in sweat and he was starting to look worryingly tasty to the hungry juggernaut. Mo shook his massive head to rid himself of an appetizing image.

“We're getting closer,” he said.

Mo snorted, it wasn’t every day one was nagged by a flying pig.

Suddenly the ground began to shake as the walkers QueekQueek's men were riding approached. They had abandoned their damaged battleships, forced instead to use the lumbering constructs to haul their equipment. Mo found the things agonizingly slow as they crawled over the red landscape. With a grunt, he gazed at the mountains once more, trying to remember what Twinaxe had said about the Treasure Fleet's course.

Mo saw QueekQueek opening his snout to say something no doubt annoying, when his eyes were drawn to something. He waved for the pig to be silent.

Squinting, Mo could make out grey, hulking shapes moving around the mouth of a small canyon to the north; Stonekin no doubt hunting for the Treasure Fleet. He had been on the right path after all.

“That way,” said Mo, trying to sound casual as he twitched his horn towards the canyon.

QueekQueek gave a little squeal of excitement then motioned to his men with a wave of his snout. The convoy of walkers picked up speed and thundered past Mo heading towards the canyon. He let them press forward.

“Coming, White One?!” shouted one of QueekQueek’s men as he passed.

“Sure, just getting my breath first.” The man grinned as he disappeared in a haze of dust kicked up by the charge. Truth was Mo had spotted more grey shapes to the east, west and south. In fact, they might be surrounded. The wily juggernaut decided he’d let QueekQueek’s people test the waters before he did anything rash.


Mo ground his teeth; while he had been battling his way across half the world to find his friend, Twinaxe had been on a veritable pleasure cruise with the wounded heading back to Lyr. QueekQueek hovered past him and the wreck, moving towards the craggy spikes that marked the mountain range’s end. A cloud of dust rose behind them like red, steamy breath from a predator’s fangs.

Mo joined the silent QueekQueek and looked down on the vast stretch of sand that marked the edge of the Red Desert; he saw what had captivated the pig's attention. In the distance he could make out thousands of landships slowly making their way towards the border. With them journeyed an army of creatures who looked to be from the Fire Tribes. The sky above them swarmed with drakes darting in and out the immense dust cloud kicked up by the Treasure Fleet’s passage.

He tried to imagine how much gold the fleet was carrying and was about to give up when something big exploded nearby, showering them both in small rocks.

Mo and QueekQueek spun around in time to see Blight's fleet rising swiftly from the wastes behind them. As the Raven ships rode the warm updrafts funneled by the mountain range, their rolling broadsides began to hammer walkers that were still trying to get into the canyon or clambering up the mountainsides.

The dark bulk of The Ravenheart appeared in the fleet’s midst and almost immediately hurtled straight towards Mo and QueekQueek.