Cards are one of most important aspects of the game. They represent the units, buildings and spells that can be played during the game. Before starting a match, a player must first select up to 20 cards to make a deck. This deck can then be used in matches.

Each faction has their own set of themed cards with unique traits and abilities.

Each player starts their collection with the Starter Decks. Additional cards can be obtained from Booster Packs, Achievements the Marketplace, or by trading with other players directly.

Each card lists information about its cost, stats and other characteristics. 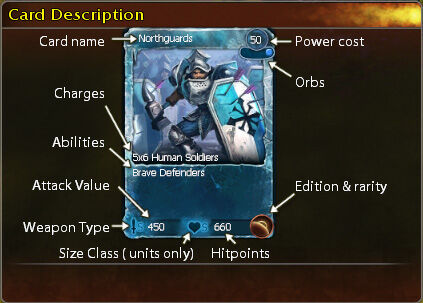 Summoning a squad of

Northguards costs 50 power, and it requires one frost (blue) orb to be owned by the player.

The level 0 Northguards card has five card charges, and a squad of six Northguards is summoned each time. Each Northguard deals approximately 75 damage in 20 seconds and has 110 life points. They have a melee attack, deal +50% damage against small units, and are small units themselves. The Northguards have no abilties and their flavor description is 'Brave Defenders'. They have no Affinity.

The Northguards card is a card of common Rarity released in the Twilight Edition.

The amount of power required to play a card is listed at the top right corner of the card. Here you are also able to see how many orbs you need in order to use this card.

The number in the bottom left corner shows the amount of damage a unit or building deals in approximately 20 seconds. If the unit is a squad, the listed damage value is the total for all squad members together. Units can either deal melee, ranged or special damage, shown by a sword, bow or star icon respectively. Melee or ranged units get a 50% damage bonus against enemy units of a certain size: S(mall), M(edium), L(arge) or Extra Large (XL). Units with special damage get no size bonus. Instead they often have a special damage ability such as Siege.

The life number in the bottom right shows how much damage a unit or building can take before being destroyed. The letter next to the heart icon on unit cards displays which size they are: S, M, L or XL. If the unit is a squad, the life number shows the total for all squad members together.

Near the bottom of the card artwork is a line displaying the number of charges, the squad size if the unit card summons a squad of units, and the card type.

A squad is controlled the same way as you would control a single unit, but the squad members can die individually and can even be revived through healing spells. Squad members cannot be revived from the passive regeneration gained from standing in proximity to friendly buildings.

Abilities are listed in the text box on the bottom half of the card. You can mouse over the card to see what each ability does.

Spell cards have no abilities but they do have a flavor description. The effect of the spell is shown when mousing over the card. If the spell has a spell cooldown it is listed at the end of the description.

Cards from the Renegade Edition or a later set can have an Affinity. The affinity is shown by an orb in the bottom right corner of the artwork: it can be a Shadow, Nature, Fire or Frost orb.

The bottom right icon on a card shows which edition (set) the card is from. The color of the icon shows the card's rarity. There are four different card rarities: Common (bronze), UnCommon (silver), Rare (gold), and Ultra-Rare (diamond).