In Skylords Reborn cards can be upgraded to improve in power. This may change their stats, costs, or abilities. Some cards even gain completely new abilities when upgraded. Card Upgrades and additional charges increase your deck level from 0 up to 120. Normal Card can be upgraded up to three times. Card Upgrading is performed in the Card Upgrades Window, which can only be accessed from the Forge User Interface, thus upgrading cannot be performed while playing a match. The process can be reverted.

The Card Upgrades Window can be opened from Inventory and right-clicking on a card or upgrade card and selecting Upgrade. Alternatively when the deck is

locked, right-clicking on the card in the deck directly opens the Card Upgrades Window. Be careful, since when the deck is

unlocked this will remove the card immediately from your deck!.

Alternatively, upgrade cards can be claimed by purchasing them with earned

Gold. The upgrade claim costs are displayed below: 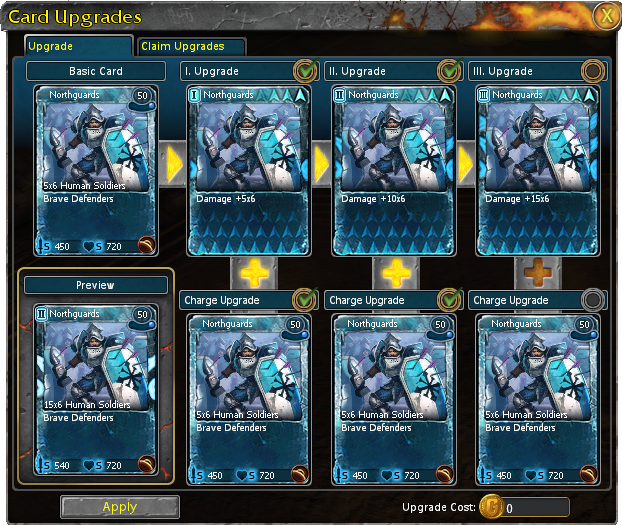 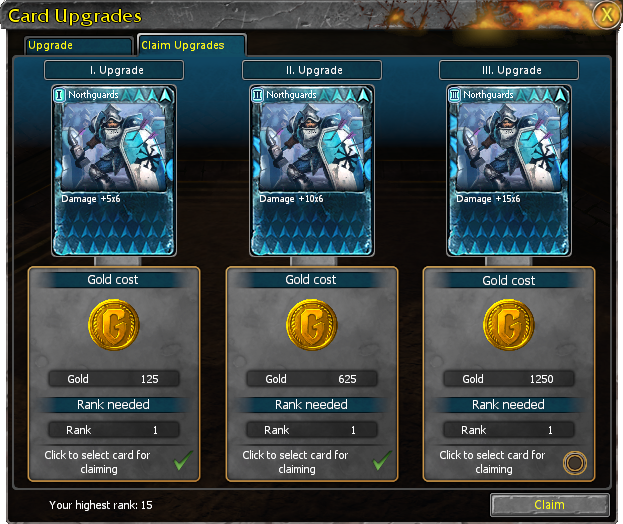 The table below is very likely to change soon!

Through upgrading your decks gain level. Each Upgrade and each additional charge on the card raises the deck level by 1. The maximum reachable decklevel is 120.

Costs for Upgrading the cards vary on the rarity of the to be upgraded card. You also need to unlock the Upgrade first by buying it with Tokens or dropping it randomly in PVE missions. The additional charges require 1 copy of the card for each charge added.

BattleForge cards support an upgrade mechanism which allows players to increase the power of their favorite cards. Upgrades are performed in the Card Upgrades window, which can only be accessed from the Forge UI (upgrades cannot be performed while playing a match). The card upgrades window can be opened from Inventory and right-clicking a card or upgrade card and clicking Upgrade.

Cards can be upgraded two levels, with each level having two types of upgrades, regular upgrades and charge upgrades. Regular upgrades are either won from PvE loot or claimed using PvP Tokens via the claim upgrade tab in the card upgrade window. Regular upgrades have one or more of the following effects:

Upgraded units are indicated by one, two or three ticks above the unit's healthbar.

In BattleForge, Upgrades allow players to slightly increase a card's abilities or statistics and optionally its charges. For instance, creating a squad an from upgraded Unit card creates a unit that is analagous to veteran units in other strategy games. However, in other games, veteran units usually do not persist from match to match, while in BattleForge, once a card has been upgraded, it can be brought into any future match and, therefore, is persistent. Further, BattleForge allows player to upgrade buildings and spells in addition to creatures.

While upgrades provide the player with a tangible advantage in matches, each card deck shows its level value, which indicates the number of upgrades applied to the cards in that deck. Furthermore, BattleForge Player vs Player modes attempt to keep the game fair by attempting to match players with close PvP ranking and deck levels. Also, players should be aware that upgrades do not equal strong deck-building and gameplay skills. Matches are not won and lost on upgrades alone. In fact, an experienced and strong player without upgrades should be able to easily defeat a player that has a poor deck and relies only on the strength of their upgrades.

While each card is quite useful in its basic form, each card in the game can be upgraded three levels with each level providing an incremental improvement to the basic card. Once a card has been upgraded, its upgrade level is indicated by a Roman numeral in the top left corner of the card and precedes the card's title. Further, squads and buildings summoned from upgraded cards indicate their upgrade level with one, two, or three tick-marks above their health bar.

The Card Upgrade is the fundamental upgrade, which typically increases the performance of the card by improving or adding new abilities, increasing attack strength, or increasing the number of life points. In game, these advantages are applied to every casting of the upgraded card. For example, each time an upgraded Unit card is played, the resulting creature that is created will be upgraded. In addition, any units summoned by an upgraded card will have have its summoner's upgrade level (i.e. Nightcrawlers summoned by a Master Cultist).

Upgrading a card requires having the specific upgrade card in inventory. Additionally, using a second level card upgrade requires the first level to be applied as well. Once a card upgrade has been obtained, a nominal fee in Gold is required in order to combine the Card Upgrade with the card. The cost depends on the level and card rarity.

Players can obtain Card Upgrades by participating in PvE campaign maps. In PvE, upgrade cards are randomly selected from a predefined list associated with a scenario and difficulty level. Thus, finding a specific upgrade card requires searching the Loot Table and often unlocking a specific scenario and difficulty. Further, only four cards are typically distributed per match, the four cards are a subset of a larger number of cards, and the four cards are distributed among team-mates, persistent replaying of maps is required to obtain all upgrades by PvE alone.

Alternatively, in PvP/RPvE matches, players earn Gold that can be spent to claim the upgrade cards of their choice. The cost is dependent on the rarity of the card and the level of upgrade applied.

Charge Upgrades increase the card's charge value, allowing the card to be played more often before the recast-timer kicks in. To apply a charge upgrade to a card, the Card Upgrade must be applied to it as well. Further, one duplicate of the card is required per level. Upon combining the Charge Upgrade, the duplicate card is consumed.

The sole cost of Charge upgrades require an additional copy of the card and that you have the corresponding normal upgrade. The additional copy is consumed in the upgrade. Charge Upgrades do not cost Gold to apply.

Retrieved from "https://skylords-reborn.fandom.com/wiki/Card_Upgrades?oldid=10802"
Community content is available under CC-BY-SA unless otherwise noted.