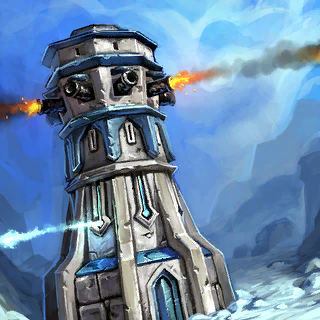 Building of the Frost faction. This common card was released with the Twilight Edition and has no affinity variants, nor a promo version.
In Skylords Reborn this card is available to all players as a starter card.

A powerful, yet simple card that fully encapsulates the defensive nature of Frost, combining immense health with solid attack damage.

Despite being only second tier, the Cannon Tower is a powerful defensive structure, capable of putting out decent amounts of damage but most notable for its immense ability to tank, with a whopping 2000 base HP. When supported from other frost-oriented cards like

Shield Building, this tower can become Extremely difficult to destroy.

For its strengths however, it has one glaring weakness: Inability to attack airborne targets. Without proper defense measures in play and synergy from archers or anti-air towers, the Cannon Tower is a sitting duck to any assault from the skies.

Maps that are defensive in their objectives, such as Siege of Hope and Defending Hope, are prime missions to use this tower. Other missions can also incorporate them as protection for your wells and monuments, such as in Sunbridge and Behind Enemy Lines.

On higher difficulties, expert particularly; the Cannon Tower can still be effective and useful so long as it is given proper support. Be wary however, that powerful enemy siege units like the

Stonekin Grinder will shred through this tower even with support, though it will certainly hold their attention for a time.

Cannon Towers should be paired alongside another tower with anti-air capability. Even a

Defense Tower will aid in covering its greatest weakness. The

Frost Crystal is a great asset for pure decks, while the

Lifestealer can cover this for splash decks.

Despite the usefulness of combat towers being rather low in rPVE, they can still aid in protecting your monuments and wells from enemy attack waves on the higher difficulties, and will usually be a distraction to give you time to summon defenses. But otherwise the use of this card is rather redundant.