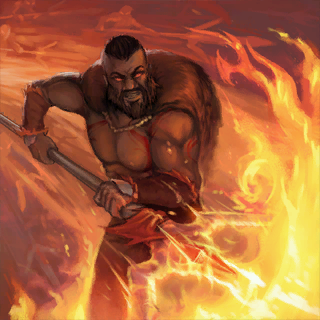 Unit of the Fire faction. This uncommon card was released with the Rebirth Edition and has no affinity variants, nor a promo version.

This card has been added to the game in Patch #400033 as part of the Rebirth Edition expansion.

Passive: The unit's attacks set hostile units or structures on fire for 5 seconds, causing them to take 2 damage per second. Further attacks against burning targets increase the damage per second up to 25 times to a maximum of 50 per second.
Crippling Strike

Passive: Attacked units may only move at walk speed for 15 seconds.
Steadfast