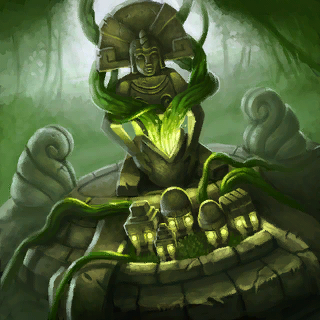 Building of the Nature faction. This common card was released with the Twilight Edition and has no affinity variants, nor a promo version.
In Skylords Reborn this card is available to all players as a starter card.

A very popular card for skylords that run a nature orb. The Breeding Grounds reduce the amount of power spent to summon creatures near it.

Passive: Building is surrounded by a magical zone of 25m radius where summoning friendly units requires 12 / 15 / 20 / 25% less of the usual power costs.
Magic Link will not stack with other Breeding Grounds, but the effect can be shared by all friendly players.

Breeding Grounds serve as an augmentation to existing bases, or to create cheaper summoning zones at various locations.

Because its ability can be shared, many groups need only run one breeding grounds between themselves.

Breeding Grounds benefits any PvE game very well. Most notably in 2-Player or 4-Player games where multiple players can benefit from the building.

Breeding Grounds is often used on Bad Harvest due to the proximity of each players starting orbs to one another, as only one player needs to use it for the whole party to benefit.

Breeding Grounds are best used to more quickly raise a T4 army than anything else. Placing it at your fourth orb will reduce the time needed to create an army.

Breeding Grounds is not frequently seen in Player vs Player due to constraints on deck space, however it does see use in certain situations.

Players that use a small T1, such as

Treespirit as opposed to a more diverse T1, can serve well if you have the space. Pure Nature is less frequently known to use it, but Stonekin tend to run it more often.

Breeding Grounds is used primarily to lessen the expense of Large creatures in T2. Typically the

Stone Tempest. Although it also serves well for summoning

Burrower among other things.

If you do not run a small T1, it is recommended to avoid this card. Nature decks have significant space issues and it is not often that Breeding Grounds can be afforded.

By reducing the cost of a summoned creature, more power can be dedicated towards spells or buildings. Or making more creatures.

Many pvp decks simply can't afford to fit breeding grounds. Misplacing the card will only hurt you in the long run.