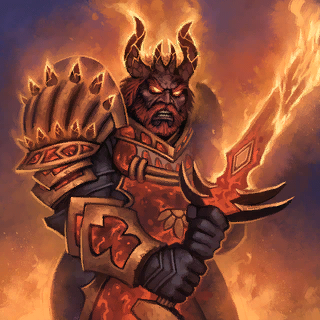 Brannoc
230
1 Skylord of Fire
Power of the Forge

Unit of no faction. This rare card was released with the Amii Edition and has no affinity variants, nor a promo version.

Active: Activate to release the fire of the Forge: a burning aura surrounds Brannoc that deals 50 damage per second to every enemy within a 25m radius. Lasts for 20 seconds. Reusable every 30 seconds.

Brannoc is a Battlegrounds late game boss unit which is encounterd on the fire preset on difficulty 8 till difficulty 10.

Autocast: Every 20 seconds begins to channel his energy, creating a huge ball of fire at a nearby hostile unit that explodes after 6 seconds dealing 1500 damage to enemies in a 20m radius, up to 7500 in total. Knocks back all unit sizes.
Searing Aura

Passive: Within a 20m radius around Brannoc enemies take 100 damage every second.
Steadfast

Brannoc was a smith, a master of his time, an artist who created intricate and impressive jewelry and metal-works. Although he made art, not weapons, his pieces were highly regarded, even by the ruling giants. But when he was summoned by the giants to their halls, and ordered to leave his family to work on jewelry for the rulers - he refused. He was forced to flee the giant realm. When he returned home, he found his house destroyed, his wife slain and his daughter missing.

Enraged, Brannoc rebuilt his furnace and began building weapons to use against the giants. Other outcasts joined him to form a resistance but they were soon hunted down by Skanen and giants.

It was during this period of fleeing, hiding and foraging for material to make weapons, that he came to Ym and met with Moon, Here with the help of Ymian alchemists he created his most powerful achievement, the "Giantsbane", an explosive powder that could be used to build weapons of unprecedented destructive power.

These weapons decided the war against the giants, although they did cost him the love of his daughter. For his service in the war, he was chosen to become a Skylord. His history as a smith affiliated him with the power of Fire.

Becoming Master of the Forge

After his elevation to Skylord, Brannoc did not submit to celebrating and squabbling as others did. Instead, he immediately delved deep into the secrets of the Forge, trying to find a way to revive Meanen, his wife. He quickly became the most proficient and powerful of the Skylords and was named Master of the Forge, Leader of the Skylords by the gods. Already however, he felt that the gods would never help him with his quest and this title was just a bone they had thrown to him.

Fall from the Forge

With his ultimate wish denied, Brannoc grew more and more aware of the passive and weak nature of the gods. He could not stand their idling and watching, and it seemed all they could give him were shrouded looks and denial. Although he had seen them fight on the field, he doubted their abilities beyond that. He yearned for the power of true creation, the power he believed the gods possessed and were denying him. Little did he know that the gods were as powerless as he was. It was whilst searching for his own ways to revive Meanen, delving deep into the arts of necromancy, that he first encountered the whispers that gave him the Twilight curse...

Long did he hesitate, but the long generations of neglect finally brought him to weave the curse onto the gods. He demanded the secret of creation in return for curing the affliction, but the gods fled, escaping down onto the earth, where they tried to cleanse themselves in the Sunbridge Shrine.
Community content is available under CC-BY-SA unless otherwise noted.
Advertisement