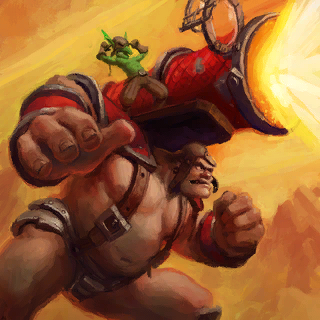 Unit of the Fire faction. This uncommon card was released with the Twilight Edition and has no affinity variants, nor a promo version.

BOOM Brothers are a surprisingly powerful unit for their price, capable of unleashing a devastating blast that can eradicate many foes.

Fire Lance. This mighty blast can dish out a significant level of damage, and includes knockback against any creature size, including XLs!

Boom Brothers are very powerful but suffer from low life points for the tier. These heavy ordinance units are designed to unleash a devastating burst of damage in vast quantities before the enemy can engage them.

Because BOOM can knock away XL creatures, enough of them can effectively stun-lock creatures. However, this ability is ground-only, making flying units a death sentence.

Boom Brothers are incredibly effective at dispatching extra-large creatures, making them a strong pick against many late-game foes. However, any flying creature can kill them easily.

Boom Brothers are powerful but lack the hitpoints necessary to survive the late-game fights. Their ability also does not contribute strongly to the immense firepower of the XL train.

This card is not used in PVP.