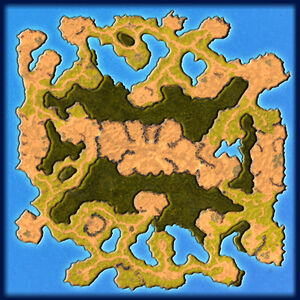 Expert
Blight is a 4-player PvE scenario that can be played on Standard, Advanced and Expert difficulty. It is part of the campaign story The Hunt for Blight.

Free the mortal prisoners from the bandit garrison and be prepared for the unexpected.


Shane Blight strode the quarterdeck like a caged animal and slid a calloused hand over the Ravenheart's wooden railings but the familiar texture brought him little comfort.

His personal landship crew, loyal to the end, sat watching him. Long since had their Captain’s throat become raw from screaming at the mutinous scum who had imprisoned him. Now Blight could only watch the traitors from his imprisoned landship as they fumbled about below, trying to scrape a living off petty slave trading.

Once they had been part of his pirate fleet, The Ravens; feared and respected in equal measure, it had been a glorious reign. But then Blight had clashed with the White Juggernaut. At the painful memories he felt pain surge through the ragged socket of his missing right eye. He remembered the epic battles with the evil creature, the last which had cost him both an eye and the loyalty of his fleet. But the losses had granted Blight true understanding, he now knew the White One’s presence in the world was an offence to the natural order. He had originally sought out the creature because Umbabwe, his ogre witch doctor, had told him the White One’s horn would rid him of the pain plaguing his body.

But now, after facing it the beast battle, he knew it to be an abomination even by its own kinds’ standards. The world had to be rid of its foul taint, just as he would be rid of the pain that wracked his being. Blight’s need to do this one thing burned bright in his soul and drove all other thought from his mind.

In the distance, beams of light suddenly lanced skywards, Shane Blight smiled grimly. Perhaps his chance was on its way.


The storm portal closed behind the Ravenheart's stern, the dark cloud vortex spitting the landship into a dirty blue sky above the tormented surface of the Raging Sea.

Beneath her a cluster of massive stone pillars pierced the water. Shrouded by columns of sea spray, the huge formations looked both impressive and foreboding. Wooden docks and storehouses were bolted onto the black cliffs with titanic chains that still appeared sound. Several old landship hulks swayed in the grip of decaying ropes. Speared to the highest cliff by harpoons, a faded black flag with a red raven emblazoned on it snapped angrily in the high winds. Blight grinned, glad the Raven's Nest had endured the Twilight in relatively good shape.

“The Ravens will rebuild. We will need men.” Blight squinted at the tired looking vessels before him.

“And ships fit to serve in my fleet.”

His few men stared at the swaying wrecks with dismay.

“Back to work, maggots!” snapped Blight.

As the landship crew scurried back to their jobs, Blight's gaze strayed north towards the wastelands, he smiled slightly.

“I'm coming White One, I'm coming. I hope the Twilight hasn't finished you. That privilege is something I hunger for myself.”