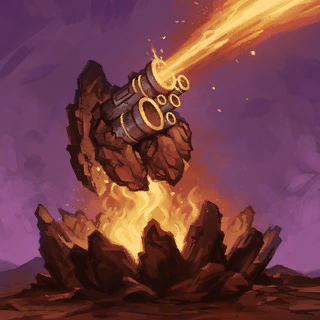 Building of the Fire faction. This common card was released with the Renegade Edition and has 2 affinity variants,

One of the only dedicated anti-air towers. The Blaster Cannon is capable of dealing massive damage to most airborne units that fly into its range, but cannot attack ground units, requiring support to cover its weakness.

Autocast: Every 3 seconds, cannon blasts bolts that deal 208 damage to enemies in a 5m radius around its target, up to 312 in total. Affects air targets only.
Infused Rage
Affinity Dependency:

Passive: Building does increasingly more damage the longer it attacks but falls back to its original damage output if it doesn't shoot for 10 seconds.
Enhances the damage of

Baneful Bolts by 50% on the third shot, and 100% on the fifth shot. Rage persists as long as the tower continues shooting.
Baneful Bolts

Autocast: Every 3 seconds, cannon blasts bolts that deal 208 damage to enemies in a 5m radius around its target, up to 312 in total. Affects air targets only.
Tainted Magma
Affinity Dependency:

Passive: Building is surrounded by a magmatic aura that deals 25 damage to all enemies within a 15m radius every 2 seconds.
Provides 250 ATK power against any ground unit in close range.

Because it is an anti-air tower, Blaster Cannons should be constructed in locations where flying units frequent, as putting them in a place where their only target never goes is a complete waste of power. The inability to attack ground units is a crippling weakness that makes this tower extremely easy to destroy for even the weakest enemy unit given enough time.

The affinity you take heavily influences the performance.

Tainted Magma provides an aura of consistent damage to any enemy that moves into close range, and offers a very low 250 ATK power to any ground unit in range.

Baneful Bolts to gradually increase in strength as the turret fires, by 50% on the third shot, and then 100% on the fifth shot and every shot thereafter. Once fully enraged, Blaster Cannon gains an incredible 2600 ATK power which allows it to shred through second era and even some third era flying units.

Blaster Cannon is a tower that requires some prior map knowledge to make the most use of. Learning where flying enemy units are most frequently encountered is key to placing this turret where it can be the most effective. Maps like Defending Hope and Slave Master are both great examples of maps that Blaster Cannon can be greatly effective on.

An enraged Blaster Cannon can eradicate most flying units in the campaign missions, but it does not have the firepower to deal with the strongest airborne threats like the

Twilight Dragon without support or stacking towers in close proximity.

Blaster Cannons fulfill a niche use in rPvE difficulty 10. Typically, flying creatures always appear in the first camps on this difficulty, which can be very dangerous if left unchecked. This is particularly so when dealing with Lost Souls and Stonekin, who have the

Stonekin Crystalfiend respectively, both of which can wreck your early push in no time at all. A Blaster Cannon can quickly eliminate the problem without setting you back too much.