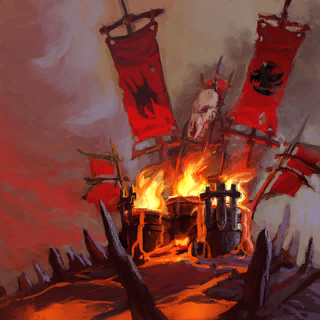 Building of the Fire faction. This common card was released with the Twilight Edition and has no affinity variants, nor a promo version.
In Skylords Reborn this card is available to all players as a starter card.

A support structure that enables its user to refund power from their own units that die near it, but has no combat ability of its own.

Passive: Friendly units that die within a 25m radius of the banner immediatly return 20 / 24 / 28 / 33% of their original power costs into the power pool. The remaining power costs are granted as void power.

The benefit the Banner of Glory offers cannot be ignored, for its strength is significant in returning power from lost units. This allows banner of glory to be used both as a cushion in tough fights, and as a way to recycle unwanted units and return power.

The banners effect is stronger the higher a creatures power cost is, making later-game units return a large amount of power if they are defeated, so it has applications across the entire game.
Rapid Construction

Passive: Construction time is reduced by 85%.
Rapid Construction enables the Banner of Glory to be constructed even in the center of a large battle, as it will finish construction incredibly quickly. If built next to a power well or monument, it constructs near-instantly. This can be used to build banners in offensive locations to benefit the assault.

The Banner of Glory is both incredibly versatile, and powerful in most circumstances. Units that perish near this banner will return some of the cost spent to summon them instantly, giving this structure great applications both to soften the impact of a battle or to recycle units you no longer need. Furthermore, the rapid construction of this building means you can put it almost anywhere in virtually any situation.

This building is extremely fragile however, so even a weak unit could quickly destroy it.

Because campaign missions can be learned, the Banner of Glory can be placed in areas where large fights tend to break out, particularly with losses on your side. It also serves great use as a supportive aid in boss fights as you can refund much of the power gained from its effect into spells or more units.

Because Banner of Glory can stack with the

Furnace of Flesh, this building typically is used to create a power generation station as well as to recycle units, rather than simply cushion the blow of a fight.