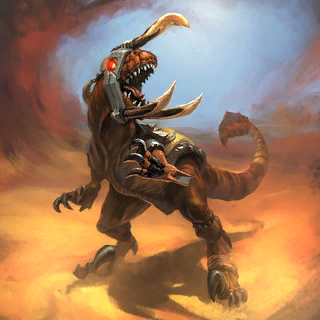 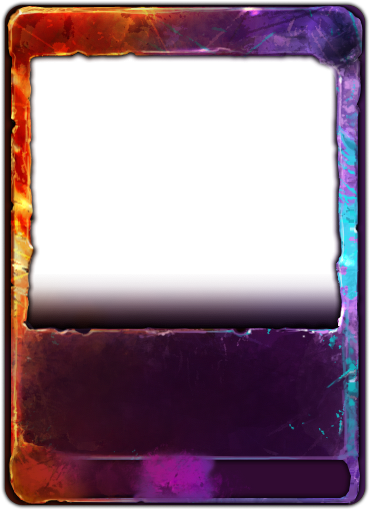 Unit of the Bandit faction. This common card was released with the Renegade Edition and has 2 affinity variants,

Shadow, but not a promo version. The Bandit Stalker is a peculiar unit employed by the Skylords. Its shield piercing bite offers some advantage against ice shields, but it can adapt to hunting beasts.

Gifted Piercing 25% of all damage dealt by this unit cannot be warded off with the help of damage reducing abilities because it is able to circumvent every buff or protective shield. It additionally deals 100% more damage against Beast creatures.

The gifted affinity offers a 1/4 value of damage piercing, ensuring that at least 188 of its attack power is bypassing shields and damage reduction.

Additionally, this affinity inflicts double damage against any Beast-type creature, amplifying its attack strength to 1500, with 375 of that bypassing shields and damage reduction.

Tainted Piercing 50% of all damage dealt by this unit cannot be warded off with the help of damage reducing abilities because it is able to circumvent every buff or protective shield.

The tainted affinity offers a 1/2 value of damage piercing, ensuring that at least 375 of its attack power is bypassing shields and damage reduction.

This affinity is most powerful against opposing forces that are often under shields or defensive buffs.

Life Stealer 15% of all damage dealt by the unit will be added to its life points.

Life Stealer is the unique passive for the Bandits, restoring a percentage of the damage the unit inflicts by attacking as health.

As it is a percentile, abilities and spells that increase damage dealt will boost the amount of healing the unit receives through lifesteal.

Bandit Stalkers are rather unimpressive units that rely on the proper matchup to serve a valid purpose.

The Gifted affinity, while weaker against defensive measures has a significant boost in damage when hunting Beast-types.

The Tainted affinity has a higher rate of piercing, giving an edge against foes with many defenses.

The affinity that you choose to take with you will determine the kinds of foes you are gearing to fight.

This affinity is geared towards slaying Beasts. Foes like

Twilight Crawlers and the

It is not advisable to bring this affinity when fighting Stonekin and Bandits as these both have very few or no beasts in their arsenal.

This affinity is geared towards defeating shielded foes. Opponents such as the

Stonekin Earthkeeper or the

Bandit Sorceress are good targets for this affinity.

It is not advised to bring this affinity when facing the Twilight, as they tend to never use shields.

The Bandit Stalker is not a viable choice in RPvE. Neither affinity can truly justify its use, not to mention its overall unimpressive stats do not particularly aid in a push.

Bandit Stalkers are an incredibly niche pick with very little going for it. Seen as an underwhelming card, most players do not take this into PvP.

With their doubled damage to beast types, this affinity carries an edge against commonly seen beast cards, like

Thanks to a 50% bypass, Bandit Stalkers can get a good chunk of damage through shields and defenses. A group of stalkers can be quite dangerous to cards that depend upon their shields, such as

Ice Guardian and the

With the exception of the gifted affinity versus beasts, Bandit Stalkers have a rather low damage output.

As a melee unit, Bandit Stalkers are incredibly susceptible to Crowd Control. Sources of Knockback and Rooting in particular.

A third tier beast for the Wasteland Bandits. Bandit Stalkers are incredibly vicious hunters, feeding on smaller prey to satiate their hunger.

They are quite notable for being able to restore their own health by dealing damage.

Lifesteal 40% of all damage dealt by Bandit Stalker is restored as life points.

The Bandit Stalker is very unique in its capacity to heal through dealing damage. Especially against small creatures, Bandit Stalkers can be difficult to kill without heavy firepower because of this.

Fortunately, they can only heal off of what they can bite.

These creatures are fast and dangerous, especially as they can steal health. Defeating them is not particularly difficult though.

Crowd Control remains a valuable asset in defeating these creatures.

Retrieved from "https://skylords-reborn.fandom.com/wiki/Bandit_Stalker?oldid=14867"
Community content is available under CC-BY-SA unless otherwise noted.