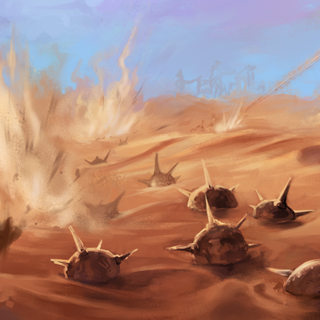 Spell of the Bandit faction. This rare card was released with the Rebirth Edition and has no affinity variants, nor a promo version.

This card has been added to the game in Patch #400031 as part of the Rebirth Edition expansion.

Requires the selection of source and target location.
Treacherous Path
Creates 4 clusters of mines in a line of 20m. If a hostile ground unit gets as close as 10m to a cluster, its mines will detonate in 6 bursting waves. Each wave deals 100 damage to hostile units and 25 to buildings in a 15m radius, up to 300 in total. If no enemy approaches a cluster within 10 seconds, its mines will disappear again. Affects ground targets only. Cannot damage wall segments, Power Wells or Monuments. Cannot be placed nearby hostile units and structures, excluding walls. Knocks back small units. Reusable every 35 / 35 / 35 / 25 seconds.