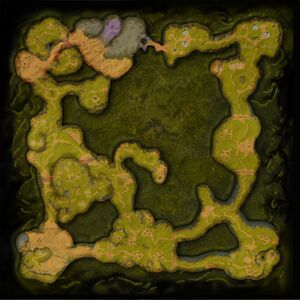 The humans have found one of the fabulous gold wagons the Red King stole from the giants. This wagon might be used as argaining chip for peace withthe giants, but local bandits have different plans.

Expert
Bad Harvest is a 4-player PvE scenario that can be played on Standard, Advanced and Expert difficulty. It is part of the campaign story The Treasure and the King.

Protect one piece of an unimaginable treasure and face the wrath of a giant.


Rogan walked the length of the landship marvelling at the contraption. A vessel of both science and magic, it sailed the skies, majestic proof anything was possible. The massive cask chained to its deck was unblemished and looked every inch a container for unthinkable wealth. There was no sign of the crew tasked to guard it, the Red King’s guard must have left the valuable cargo behind. Rogan rubbed his chin, wondering if the treasure was some kind of simple trap. He smiled ruefully, knowing it was worth the risk.

With the contents of this cask , one could have bought half a city in the old world. That there were hundreds of these wagons elsewhere, either abandoned or still on some covert trek guided by the Red King, made him shiver.

But this gold was useless; it could not feed or clothe the needy.

Except it could be perhaps used to pay back a sliver of the debt owed by humanity to the giants. Everything would depend on the Giant King accepting the offer, if the messenger even reached him alive. It would be a gamble, but it might be worth it.

Useless as gold might be, Rogan knew he might have to have to fight his own mortal brothers for it. He shook his head; as if enough blood was not already being shed.


Rogan watched the giants lumber off, their huge bulks fading to grey shapes in the evening haze.

Even far away he could hear the ground thunder with their mighty steps. He could not believe he was still alive.When they had first come, Rogan had expected death and destruction, not talk. But they had listened; heard what their rogue brother had attempted and what the Skylords had achieved for the mortals. Jorne had gazed up at clouds that burned red in the evening light, and nodded. Then they picked up their brother’s corpse and left, promising forty days of peace.

Rogan didn’t know what had really been achieved. But forty days should be enough to retake Lyr and build a solid defense. It would have to be.

Positions 1 and 2 are very similar, both need to focus hard on defense in the start, because they only have access to t2 and are being pushed by a lot of waves from many spawns, and later on even a grinder, and if they are not ready for it they can lose their t1 unless player 4 is in a position to help them. Your defense should includes 3 or 4 strong defense towers, such as

Rioter's Retreat and other strong towers. Once your defense is set up you can start pushing, but at this point players 3 and 4 should be in a position to go up and end the game using t4 units. If they are not, and you get a chance to push, there are a few options. If you go lost souls, meaning frost shadow orbs, using lost shade to push can be really good, using viridya as well to heal them and kill any flying units that may come. If you use stonekin using

Aggressor will allow you to push easier. remember to use support spells such as

Curse of Oink. From both positions you should remember that waves are still coming so be careful about getting attacked from both sides. After killing the first stonekin boss and getting your t3, best for position 1 to get

Lost Banestone to trap the spawn coming from the north and being able to destroy the entire t1 defense getting power back. one of you should go

Amii Monument and push with t4.

In poisiton 3 there aren't many defense options because a grinder with 2 stone warriors will push the gold cart at about 3:40 minutes. First of all you need to take a well and an orb at your t2, then rush up with

Coldsnap to freeze the bandit trooper and the rest of the middle camp. Rushing straight to the upper orb and getting a second shadow orb, killing your Dreadcharger for power back, and spawning

Church of Negation above the orb with a

Kobold Engineer below it. if you seem to be slow about setting this up you can get the wall up to slow the grinder down. At about 4:00, you can spawn

Ice Barrier near the bottom wall, and spawn a

Skyelf Templar next to it, use the skyelf templar's ability on the ice barrier, and it will trap the spawns coming from the bottom, meaning no more spawns will come, until minute 20 where 2 bandit walkers will spawn from the middle camp and come up, but by then you should have 4 orbs, and you can use

Skyelf Commander on the Ice barrier, making it take 85% less damage. The combination of skyelf templar and skyelf commander will tank both of the walkers, with the 2 spawns that are attacking it. You can also spawn a unit or 2 and kill the walkers if you don't want to go 2 frost orbs. After setting up the ice barrier and skyelf templar you should focus on defending the upper wall. getting another church is the safest, but you don't have to, if you get 2 lost banestones fast enough. You can start getting wells after getting a templar on the church. To make the defense self sufficient, you need to get 2 kobold engineers and a skyelf templar on the church, if you use 2 churches, 3 kobold engineers and a skyelf templar on the church that is being used most. After some time you will start getting attacked by razorshards, and church of negation can't reach them. To deal with them you have 3 options before you get to t4. Using nether warp to teleport them close enough for your church of negation to kill, or using an engineer or dreadcharger to get into melee range with the razorshard and pulling the slowly into church's range. At t4 you'd want to spawn a construct to make the defense entirely self sufficient and you can forget about it and help the rest of your team to push and end the game.

In position 4 it is always better to go from poisiton 3 path, clearing the middle base and going down to your 2 orbs. That way, you also help poistion 3 by lowering spawn waves to his bases, as well as only needing to fight 1 wall and not 2. When you reach your 3rd orb, coming from above, you can quickly get your t3 before even getting wells, and setting up a

Lost Banestone. by that point no grinders should come from the middle camp yet, so you only have to deal with stonekin rageflame and earthkeepers, so trap a unit using the lost banestone and kill the rest. If the player on position 3 trapped the spawns correctly, then one lost banestone near your 3rd orb and another one near your first orb are enough so that no more spawns will come to either you or player 3 from that base. If you wish to help player 1 you can put a lost banestone near their t1 as well and trapping the spawn coming from the higher base as well, making it easier for him to defend.

How to win the game after getting T4

In t3 you should have frost shadow shadow/nature. position 3 needs to go t4 frost for skyelf commander to help defend the south wall and trap the 2 incoming bandit walkers. Either way the best and easiest way to win is orb switching the frost orb to nature, and going t4 nature, so with 2 nature orbs and 2 shadow orbs you can push the fastest and easiest. Using

Green Peace to ignore enemies you don't need to kill. After killing the last stonekin boss, push through mid and going to the left side of the healers, killing the anti air tower and using green peace to make the enemies not attack you, you then spawn

Fallen Skyelf, set up the necrofury next to the healers and use the fallen skyelf ability on the titan, use

Unholy Hero on the necrofury and necrofury's ability Bone shards on the titan killing him in 1 shot and ending the game.

Position 4 should be in the best position to do this but in case he is slow everyone else can do this. 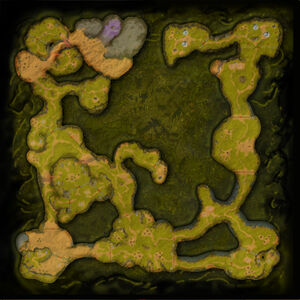