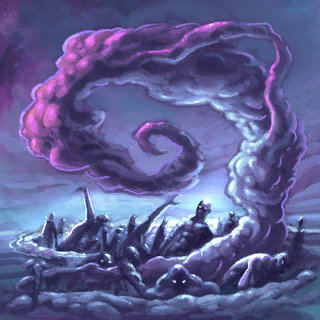 Spell of the Shadow faction. This rare card was released with the Twilight Edition and has no affinity variants, nor a promo version.

Mischievous Aura
Needs 4 seconds to create a destructive aura of 30m radius where playing out cards will backlash. In addition to its normal effect every card played out will also deal 5 / 6 / 7 / 8 times their power costs times their orb count as area damage to hostile and friendly units, up to 10000 in total. Lasts for 40 seconds. Reusable every 55 seconds.