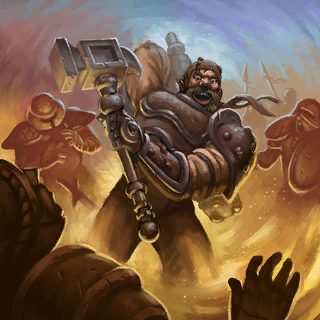 Spell of the Bandit faction. This rare card was released with the Renegade Edition and has 2 affinity variants,

Godspell: Confuses up to 5 units within a 25m radius which will make it impossible for them to distinguish between friend and foe. They will therefore start attacking whatever entity is next to them no matter if it is friendly or hostile. Last for 15 seconds. Reusable every 45 / 30 / 30 / 30 seconds.
Tainted: Friend or Foe?
Affinity Dependency:

Godspell: Confuses the targeted enemy unit which will no longer be able to distinguish between friend and foe for 15 seconds. It will therefore start attacking whatever entity is nearby no matter if it is friendly or hostile. It may also transfer its confusion to other surrounding hostile or friendly units within a 15m radius, up to a total of 15 targets may be affected. Reusable every 45 / 30 / 30 / 30 seconds.