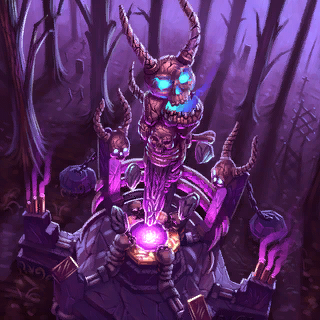 Building of the Shadow faction. This rare card was released with the Twilight Edition and has no affinity variants, nor a promo version.

An immense fortress of darkness that can deploy an unholy explosive to the target location. Sacrificing units can significantly charge up the strenght of the bomb.

Active: Activate to place a Nether Bomb that explodes after 10 seconds dealing 1500 damage to hostile and friendly entities in a 25m radius around its target, up to 9000 in total. Only one bomb may be placed at a time. Can be placed nearby enemy units and structures. Cannot be disabled by spellblocking abilities. Knocks back small, medium and large units.

Mass Destruction drops an explosive Nether Bomb to the targeted location, which in and of itself is its own structure. The unique trait of this bomb is that it can be deployed anywhere on the map, as long as a friendly creature is in the vicinity of your chosen location. Because of this, the bomb has almost no limitations to where it can be dropped and is a global threat dictated by the summoners creatures. The bomb has a lifetime of 10 seconds, during which it CAN be destroyed prior to detonation. However, with 4000 Life Points this is unlikely to happen unless it is dropped right next to a very powerful siege unit, or a large mob of enemy creatures.

The explosive power of this bomb is already high. But it can be amplified to extreme proportions thanks to the Self-Abandonment passive.
Self-Abandonment

Passive: Own units may be sent into the Altar to sacrifice them and store their life points. A maximum of 8000 life points can be stored. 300 / 400 / 500 / 600% of them will be dealt as additional damage as soon as the bomb explodes. Once the bomb has been placed no more units may be sacrificed.

Self-Abandonment allows the user to sacrifice their own units to feed the altar life points. The life points stored inside the altar are spent when its Nether Bomb detonates, which in turn amplifies the bombs explosive power. The damage can be multiplied up to 6 times at the highest upgrade level, which can allow the nether bomb to deal damage higher than anything else in the game!

With a full 8000 life points stored, and the maximum upgrade applied: A single Nether Bomb can deal up to 32,500 damage to a

Due to the extreme power of this card, it can serve greatly in the late-game to drop concentrated nukes on dangerous territory. If the bomb is kept alive for the 10 seconds it exists, it will unleash catastrophic damage.

The bomb however, is equally deadly to your own troops. Be certain to clear the blast radius before it goes off! To ensure the bomb will go off, casting

Ward of the North may be viable to protect it from being destroyed.

The Altar of Chaos is very strong in PvE, as you can dictate where the bomb will be dropped at your leisure. The nature of PvE allows you to plan out your bombs and drop them at key locations to destroy incoming enemy waves.

There is no single scenario that the altar is weak in. But keep in mind you must sacrifice a great deal of life points if you want to deal the maximum damage.

Altar of Chaos remains powerful in rPvE but the fast-paced gameplay often means your units at are risk of being caught in the blast. Not to mention your companions creatures, which could cause undesirable backlash.

One excellent use for Altar of Chaos is to feed the

Lost Spirit Ship so it can activate its crystal ability. Because the Nether Bomb is a building, it can be deconstructed to feed life points for the Lost Spirit Ship. Which enables free casting of the crystal, however you must be quick as to not let the bomb detonate close to your units.

The 4th era is usually not seen in PvP. As such, the altar of chaos likely won't be seen there.

For PvP where both parties agree to T4 however, the Altar of Chaos can be incredibly strong. Boasting enough base damage to nearly shatter a power well, it needs only a small buff of life points fed to the bomb in order to instantly shatter a base.

Due to the nature of the bomb however, it can easily be destroyed if your opponent is quick to react. A defensive spell on his buildings could save them from instant destruction, or he could unleash an attack that can destroy the bomb before it detonates. Consider this when attempting its use.